← more from
180g
Get fresh music recommendations delivered to your inbox every Friday.
We've updated our Terms of Use. You can review the changes here. 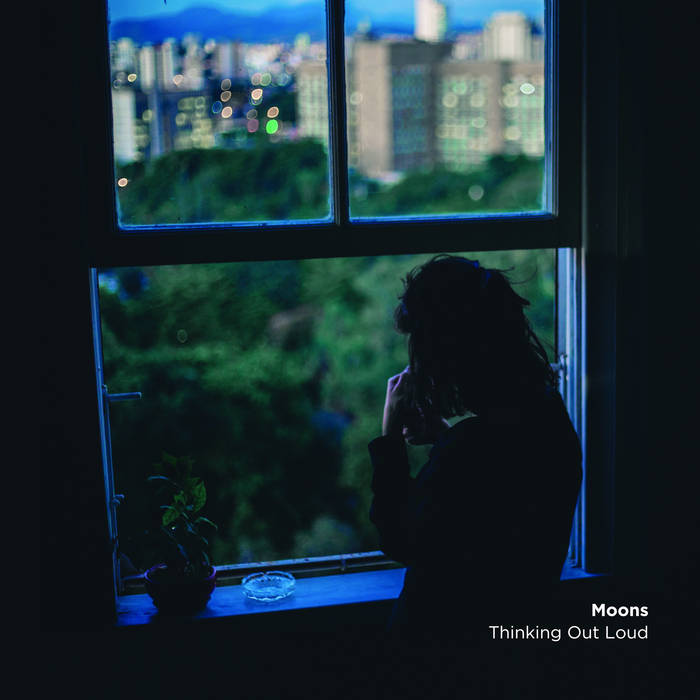 Moons is a sextet from Belo Horizonte, Brazil. Sung in English, Thinking Out Loud flows between soft and ethereal moments and guides you through bucolic and cozy landscapes with ten delicious songs made for calm, introspective and organic appreciation.

The camera goes slowly down a road. In the distance we see a cabin and walk in its direction. Through its window, a bonfire lights the place. We are gradually invited in. In the main room, there are scattered books, a guitar, a bottle of whiskey. The camera moves to the back door. Outside, there is a couple dressed in yesterday's clothes. We pass them by and head to the lake, seen in the background. As we approach its waters, we get lost in the vastness of our thoughts.

The scene described above is fictional and could figure in some production that flirts with noir, nouvelle vague or some other work that emphasizes the simple moments of life. It could also synthesize the universe of Moons, a project idealized by André Travassos which started as a personal project and became a band. Moons is now releasing its second album, “Thinking Out Loud”.

With these references in their minds and hearts, André Travassos (voice, guitar and autoharp), Bernardo Bauer (voice and bass), Digo Leite (voice, harmonica, banjo and guitar), Felipe D'Angelo (voice, keyboard, piano and guitar), Jennifer Souza (voice and guitar), Tiago Eiras (drums and percussion) and Victor Magalhães (keyboard, piano and synths) conceived “Thinking Out Loud” in a very organic way and realised it with Leonardo Marques, who recorded, mixed, mastered and co-produced this work at his Ilha do Corvo Studio.

But the process began some time before. The preproduction took form in the countryside, not far from Belo Horizonte, where Moons went twice, in 2017. There, immersed in its universe, the septet worked on and on in such an inspiring atmosphere that the melodies and arrangements emerged in a surprisingly natural way.

Back to Ilha do Corvo Studio, the band invited four special musicians, who enriched the work: the cellist Rodrigo Garcia (who had already participated in the first album, "Songs of Wood & Fire"); the producer and friend Leonardo Marques (who puts his unique guitar tones on "Hazy" and on the title track, besides playing bass in "Moons Reprise"); Rodrigo Viana (who plays the guitar on “Vik’s Dream”); and finally Thiakov (who plays the bass on “My Cave” and on the title track).

References to cinema and literature in this release are not in vain. The song “Fire Walks with Me”, for example, is a tribute to David Lynch and the Twin Peaks universe, whereas “Moons Reprise” was created from a dialogue between the characters Jane (Nastassja Kinski) and Travis (Harry Dean Stanton) in the film “Paris, Texas”, by Wim Wenders. Moreover, “Hazy” was inspired by Charles Bukowski's alter ego, Henry Chinaski.

All lyrics of “Thinking Out Loud” are written by André Travassos and eighty percent of the album has been recorded with the band playing live in the studio.

180GDULP04 - Manufactured and distributed by 180g in collaboration with Disk Union Japan, under license from André Travassos.

Moons is a sextet from Belo Horizonte, Brazil.

Bandcamp Daily  your guide to the world of Bandcamp

Mille Petrozza stops by to talk about the new Kreator album, plus music by Trauma Bond